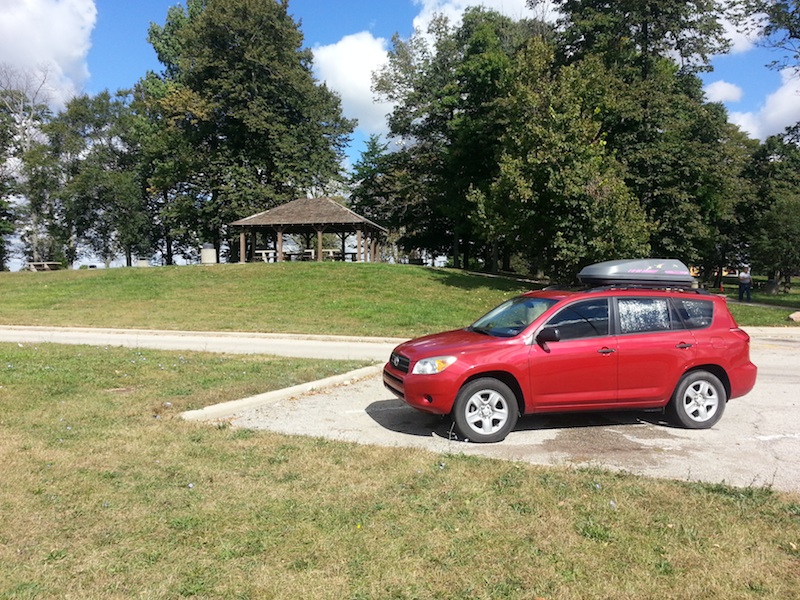 I wished I could have stayed in Columbus, more than anything else in fact. But I knew that I was being called to the road, to begin what I had initially set out to accomplish. I had more to learn.

I couldn’t stop smiling for the first few hundred miles as I made my way towards Indiana. At this point in my life, I understood that happiness is entirely a choice, and I was choosing to be excited about the road ahead (regardless of any obstacles I might need to overcome). I probably looked high to the truckers and families that were passing me along I-70, grinning ear-to-ear, but that didn’t matter. I was finally in a place – both geographically and mentally – where it didn’t matter what those around me thought. I was having my first real taste of freedom.

I stopped that night at a rest stop at the border of Ohio and Indiana. When I’ve parked at rest stops in the past, I’ve rarely taken the time to glance around. I’ve always been in a rush to get in, get out, and back on the road. This was one of the first times that I’ve taken a stroll around one, and it was actually gorgeous. My hometown doesn’t even have community parks as nice as that place!

I ended up choosing to stay there for the night. I parked the car at the far end of the parking lot and put up my window coverings. I did feel ashamed at first, as I crawled into and out of my car. I could feel the eyes of the families and couples as they drove past. I felt homeless, and impoverished. That is, until I saw that the van parked a few meters away was actually doing the same thing. As well as a few of the other cars that had parked throughout the lot for the night. Much of my anxiety about how I looked ended up vanishing after that night. The rest of it would go away a few days later, when I realized how good I actually had it.

I climbed to the top of a grassy hill where a pavilion had been built. I ate my little, single-serving cups of green beans, corn, and applesauce for dinner, and then read a book until dusk. I really can’t express how amazing it felt not to be in a chaotic rush to get somewhere or to accomplish something. It clears the mind a bit, and oddly makes life somewhat more exciting.

The sunset was on fire as I sat up on that hill. It was ablaze with nearly every color you could think of – it felt like one of those signs, which tell you that you’re on the right track in life. But just as the crest of the sun was about to dip below the distant hills, a semi-truck rolled past, blocking out the sun’s radiant light with a big, white and red trailer. This moment brought to you by Target – Expect More. Pay Less.

I slept soundly that night, despite the fact that I-70 was only a quarter-mile away. I ended up going to bed early – it’s much easier to opt for getting a good night’s sleep without a TV or internet. Besides, I was ready and willing to see what tomorrow would bring.