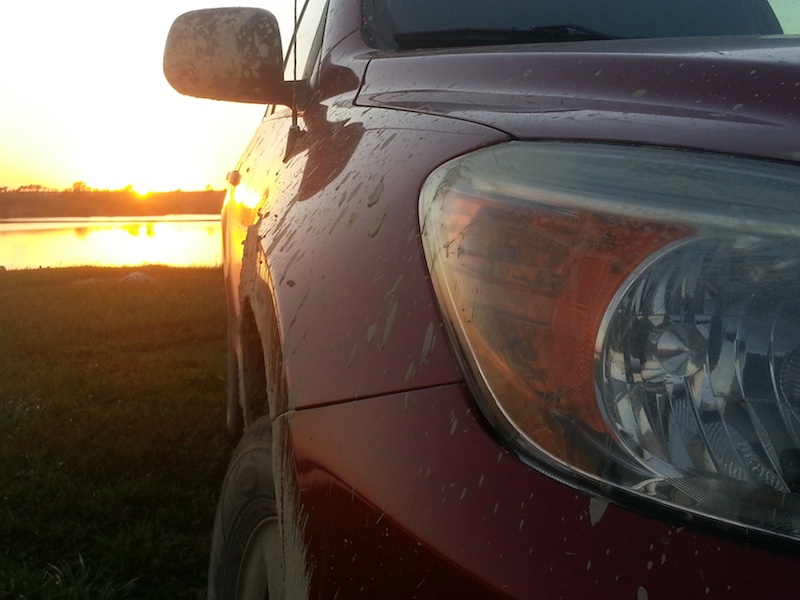 Televisions, microwaves, and internet. I think that we can all agree that getting away from luxuries such as these every now and then would do us nothing but good. There was one luxury, however, that I was not prepared to leave behind when I began really thinking about this trip – running water.

It was around this desire that I began to design my living space. How does one get a running water system into a Toyota RAV4? I spent hours sitting alone inside my parked car, trying to figure it out. I took every seat out, save for the driver’s seat, and then sat in it some more – our neighbors must’ve thought that I had finally lost my mind. I guess that I had. 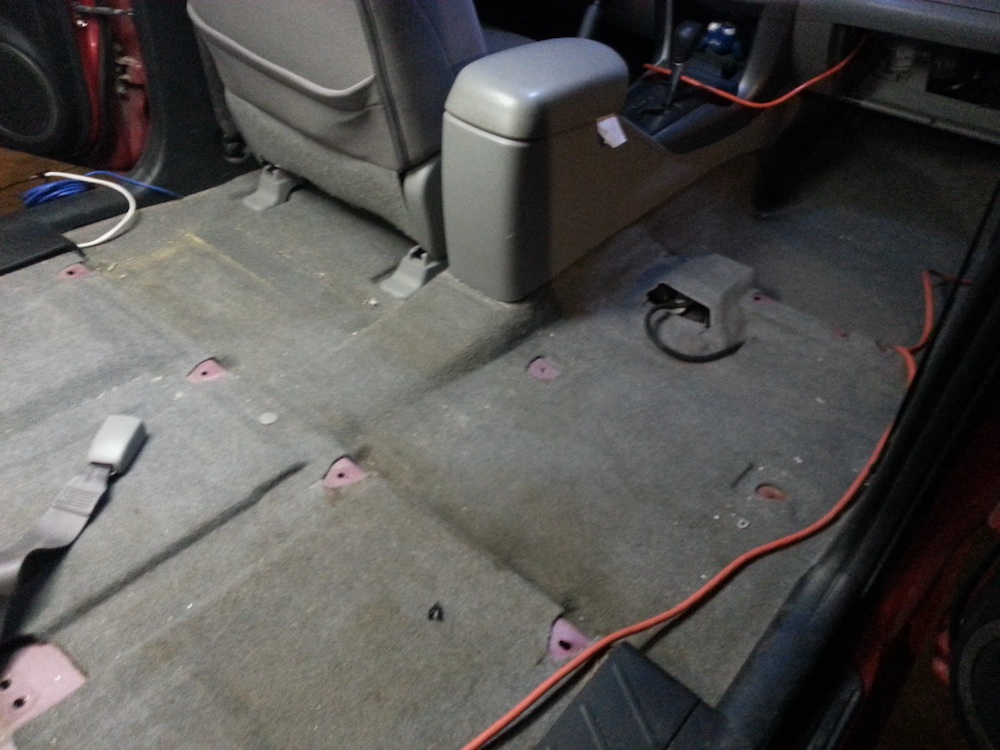 I sketched and measured, and even attempted to make a 3D model in Google Sketchup, until I figured out that the best approach was to simply do it.

This was not an easy approach. Not because I didn’t have a clear image of what I wanted the end result to look like. Rather, it was because, without having step-by-step instructions or an expert there beside me, I had no real assurance that I wouldn’t blow up the car before ever getting on the road.

There were a few points in which I would just sit there, holding my Dad’s drill to the car frame, frozen. I was never given permission to do this to a car before, nor did I know anyone who had built a wooden floor inside a car and attached it to the frame. 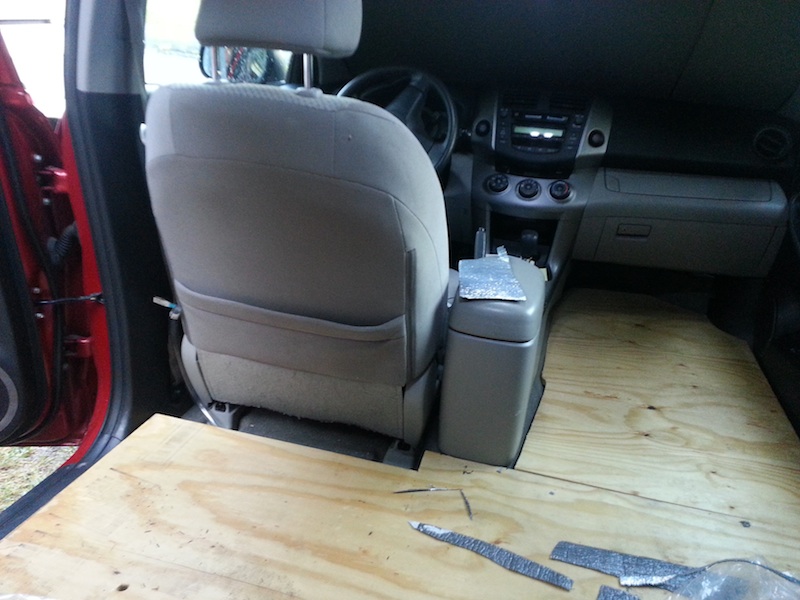 In fact, I’m sure that if I did begin asking others for their suggestions, they would have advised against drilling holes into a perfectly good vehicle. The only way in which I could surpass these moments of fear was by remembering the fact that one day I would be dead, and that nothing I did now really mattered. It helped. A little.

The sink and shower unit was a bit tricky, as I didn’t have many online references to go off of. I settled for a design in which I built a wooden box (stained an ebony color), into which I placed the bottom half of a plastic storage bin. The bin is 28″ long by 17″ wide, just large enough for me to squeeze into. 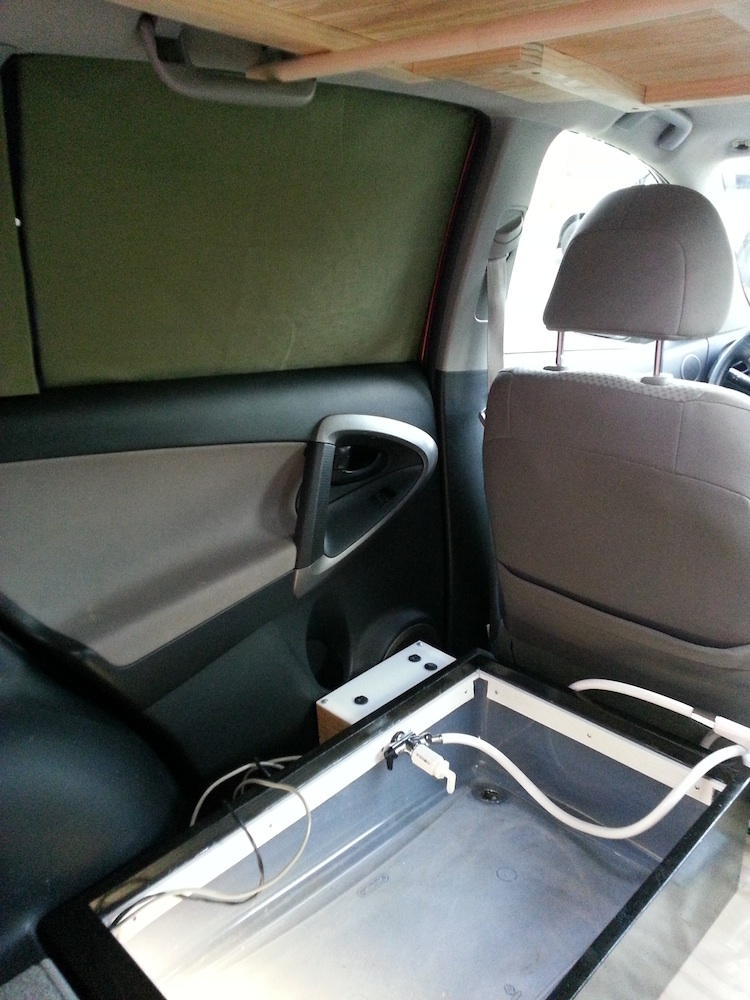 I fashioned a lid to the whole apparatus, which would fit nicely on top of the ebony box whenever not in use. When closed, it gives me a nice level surface to work or sit on. When suspended from the ceiling with a wooden dowel, I can easily hang my shower curtains from it. 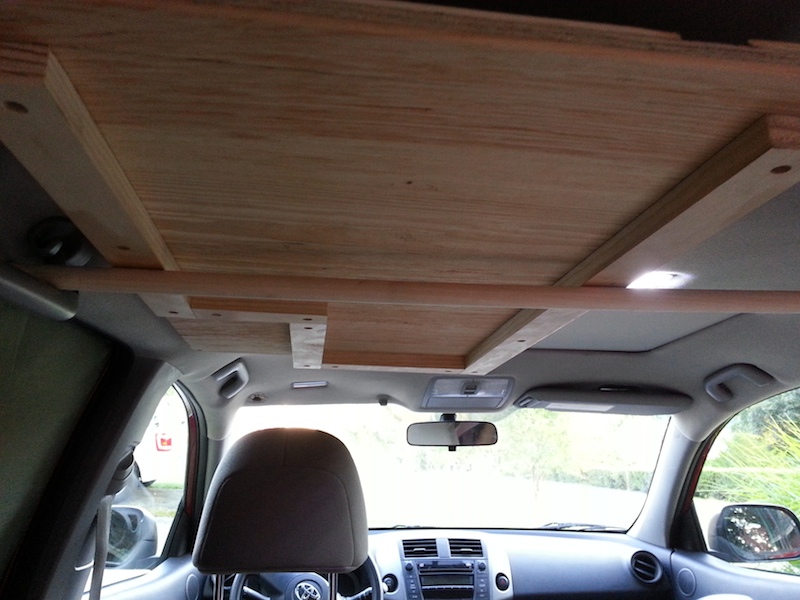 I carpeted the top of the lid to match the rest of the floor, installed LED strip tape on the bottom for lighting, and then screwed in the hooks for the curtains. All-in-all, I’d say that it was a huge success! 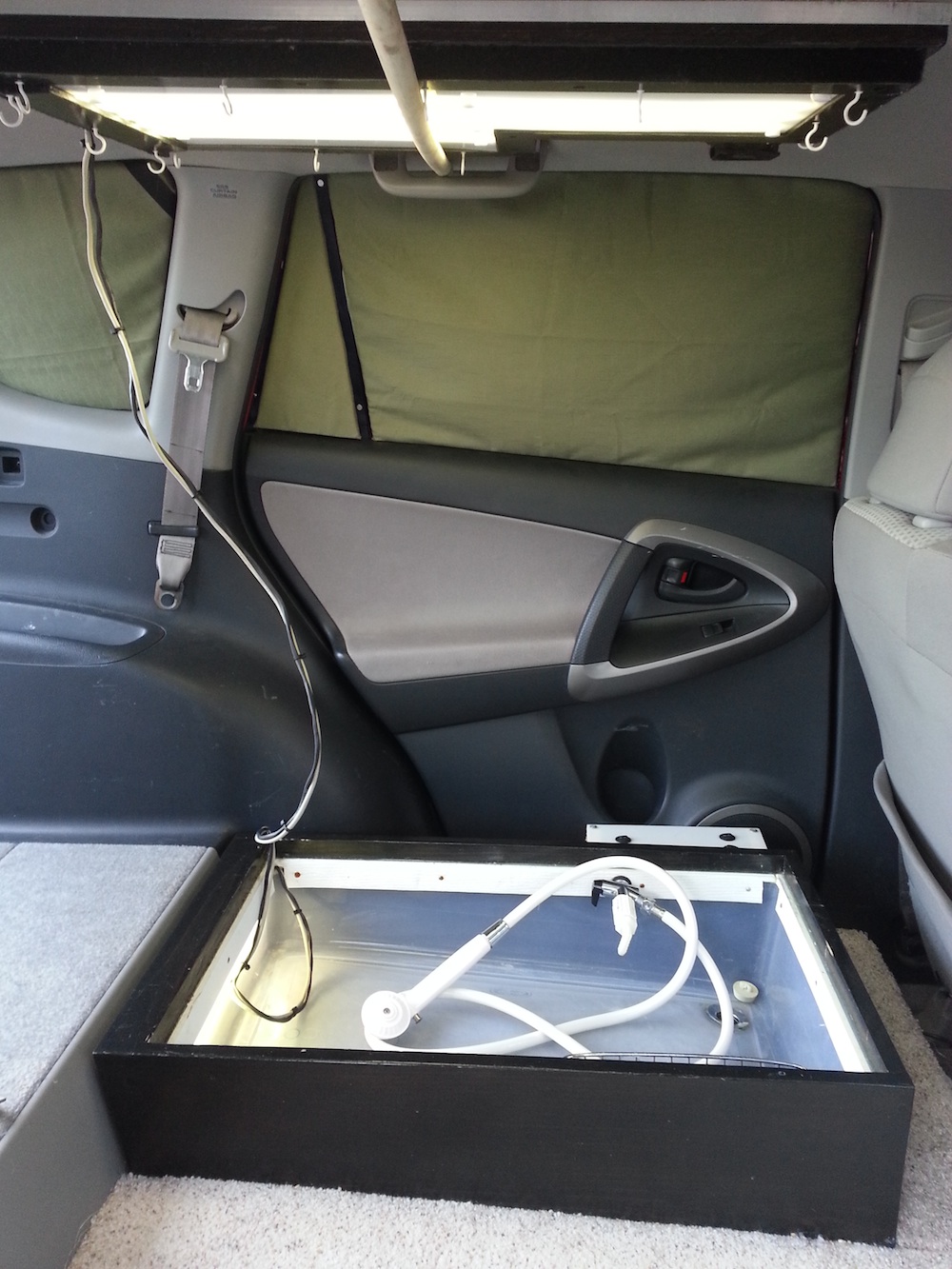 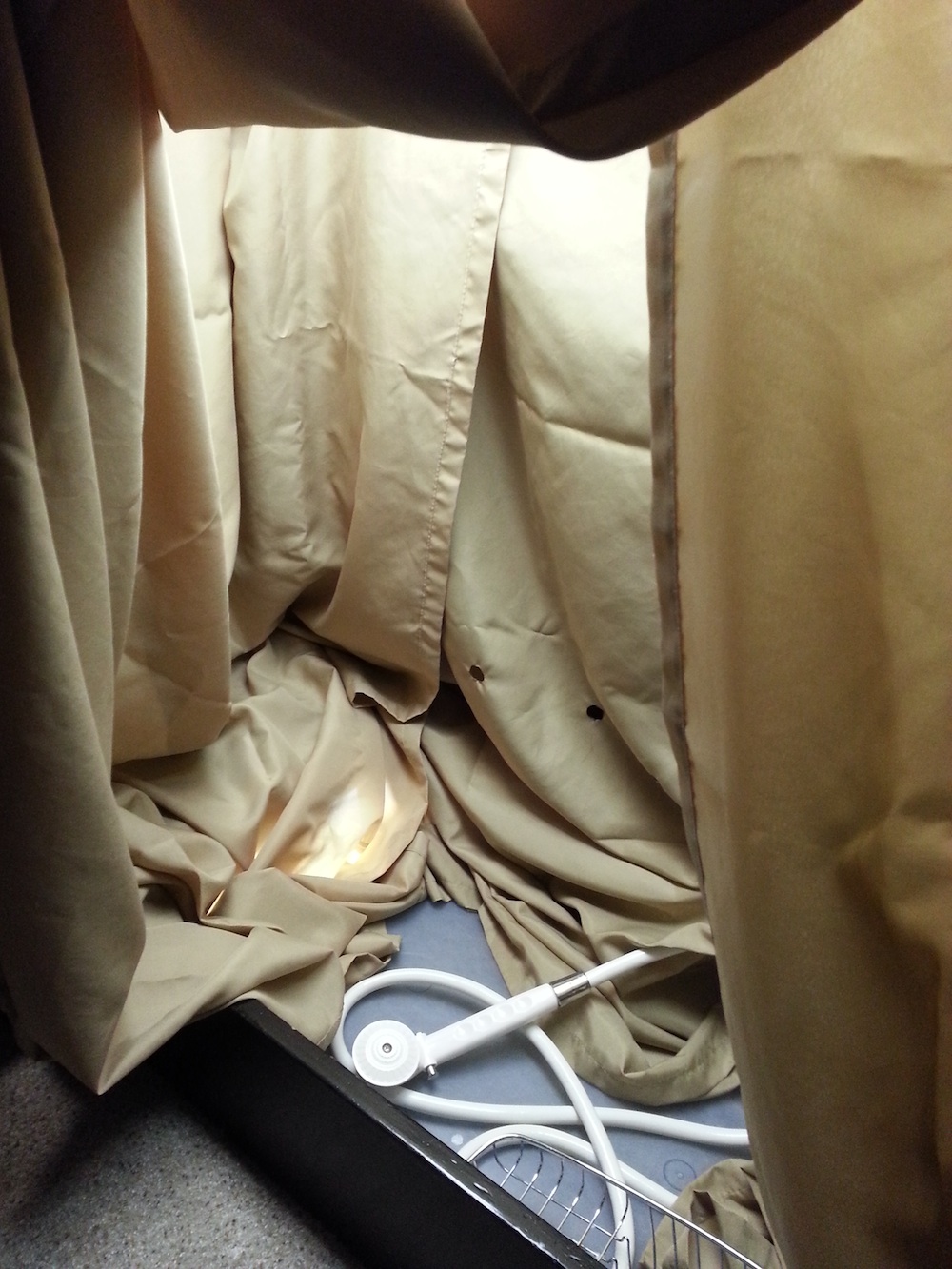 I ran a tube to a hidden storage compartment in the back, where I placed a 5-gallon water tank. My water pump, which I found for $20 on Amazon.com, has a built-in pressure switch, which means that it automatically turns on and off when I open and close the faucet valve. 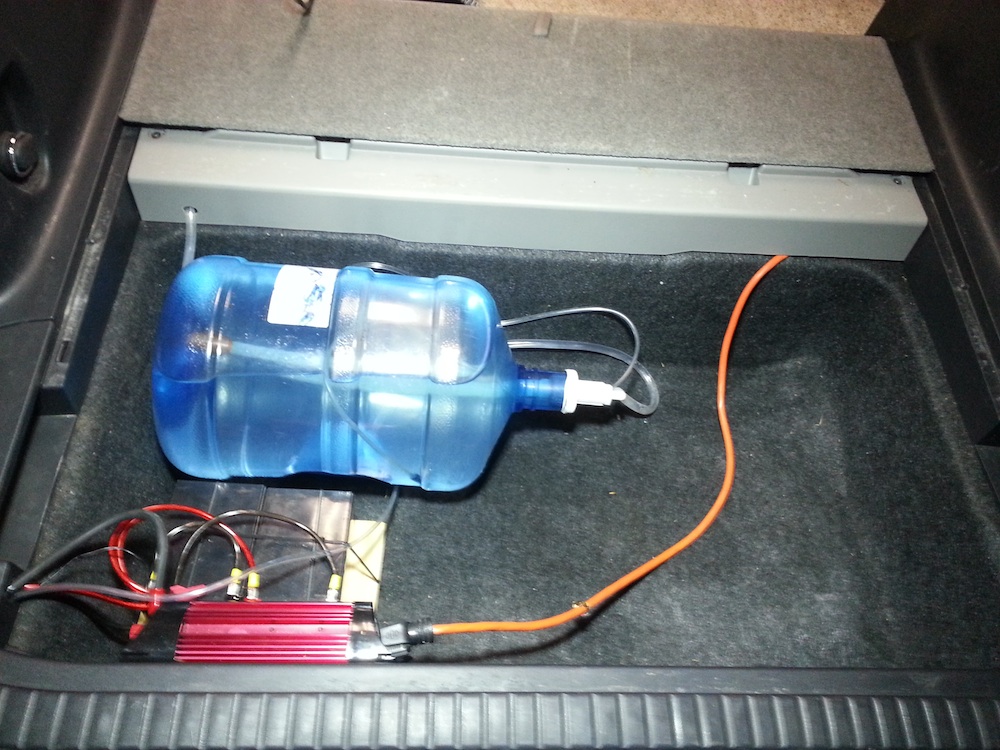 The one thing that I didn’t included was a gray water tank, to catch the used water. Instead, I use it like you would a camping shower, allowing the water drain through a tube that runs through the bottom of the car onto the ground. Because of this, I obviously have to be cautious with using certain soaps and detergents. Fortunately, I was able to find some biodegradable products, thus reducing my environmental impact.

I did make sure to install a small auxiliary electrical system so that I wouldn’t accidentally drain my car battery. I installed two 12-amp batteries in the back of the car, which charge whenever the car is running and are separated from my starter battery when the car is off. This lets me run the lights, water pump, 120-volt inverter, and other little gadgets without worrying about being stranded in the wilderness.

As an additional touch, I cut up pieces of foam board to precisely fit each window. On the outer side, I glued Relectix, an insulating material that reflects external heat and sunlight. On the inner side, I pasted a nice, green fabric, cut up from curtains that I had hanging in my old apartment.

Like I stated in my earlier post about Life in the RV4, life is sweet. I’m currently writing inside my car, lounging in my living/bedroom area. I truly can’t complain about my current standard of living – in fact, I have no reason to. I am comfortable, and for once, I feel content. Not to say that I don’t one day plan on building myself up in life. But for the remainder of my Journey, this will be more than enough. 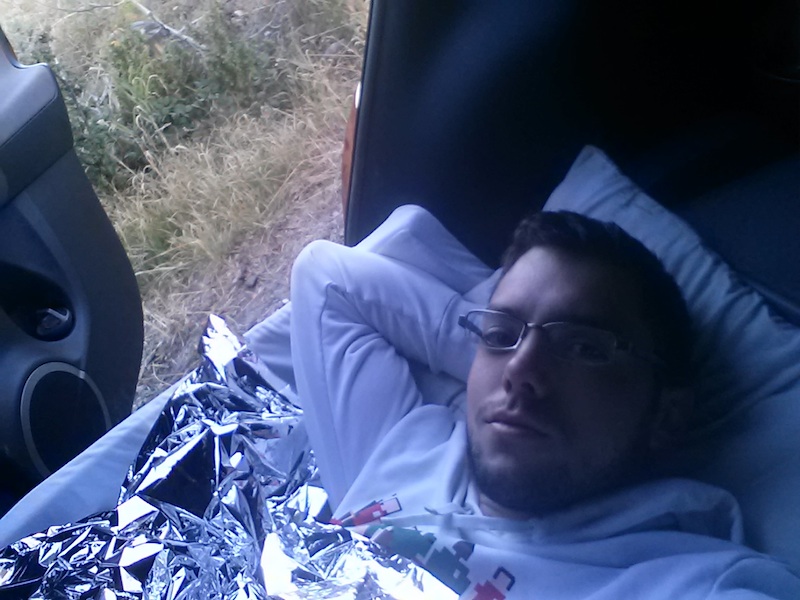 7 comments to “The Transformation [Technical Details]”