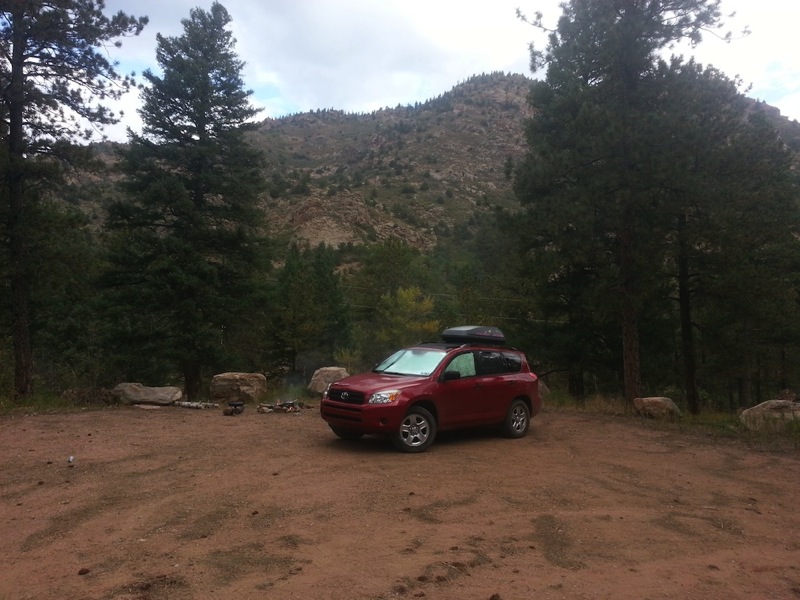 I opened my eyes. The air was cool. I peered up at the sunroof, through the roll of window-screen fabric that I’d laid overtop of it (to keep the pine needles and bugs out). It was light outside, though the sun hadn’t yet risen up over the surrounding mountains.

Crawling out of my sleeping bag and up to the front of the RV4, I turned the key – the dash lit up, and informed me that it was 43°F outside. I knew that it would be cooler up in the mountains, but I hadn’t expected it to be that much different from the weather down on the Kansas plains.

I opened the car door and got my first good look at Oak Creek Campground. 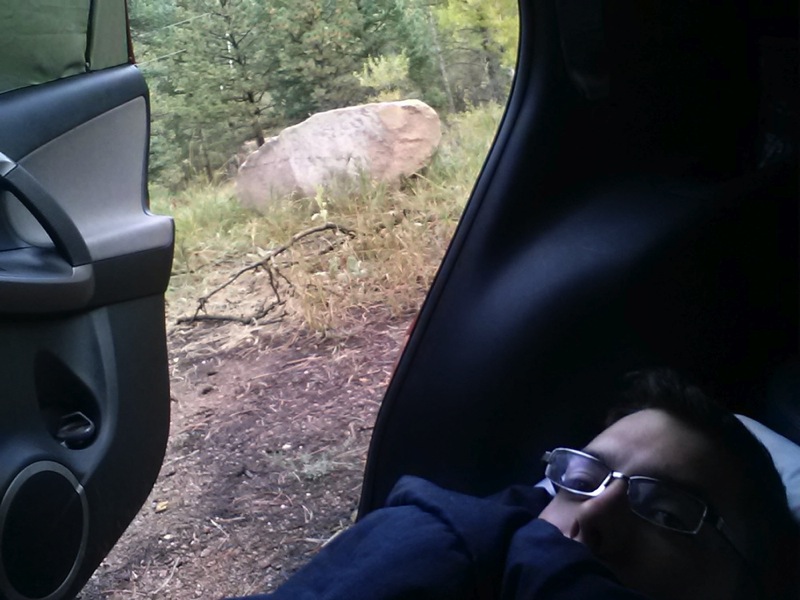 It might have been crisp out, but the Rockies made up for the chill with sheer beauty. I was nestled in a valley that lay directly between two mountain peaks. Finally, I was alone in the wildern–

Something grabbed my attention. The faint sound of approaching tires on dirt. I scanned the landscape, though I couldn’t spot the source. Hidden out of site by the forest, a vehicle was drawing nearer, to within what sounded like a mile or so. Then, as quickly as it had come softly rumbling into the picture, it dissipated back into silence.

Apparently, the “treacherous mountain pass” that I had taken to get up here was much more travelled than I thought.

I eventually figured out that a vehicle would pass by once every 15-30 minutes during the daylight hours. I wasn’t in the least bit upset about it, either. I was still hidden completely out of sight in the campground, and the sound wasn’t loud by any means – it was only obvious because of the impossible silence of this place (that is, when the mountain wind wasn’t rushing through the trees, like the Night Before).

To be honest, I liked the fact that there was a road nearby. I might be spending some serious time alone out here, but at least I did have an option, in the case that anything went seriously wrong.

I picked up my phone. No bars – nothing at all.

I built a small fire to make some green tea, and hung out at camp for a bit. At last, the first rays of sunlight came trickling through the treetops, and within 30 minutes or so, the temperature shot up. The weather was perfect. Clear skies, soft breeze; warm in the sun, cool in the shade.

Today was a hiking day.

It took me a while to decide which of the two nearby mountains that I wanted to climb. Obviously, I could have opted out of a mountain hike completely, and just taken a leisurely stroll through the valley along Oak Creek. But I had the urge to climb to the top of a mountain – so I went with it.

One had a bit steadier of a slope, and looked like it might be a smooth trudge up a hill. It was sparsely vegetated, plus I could see nearly the whole face of it from where I was standing. 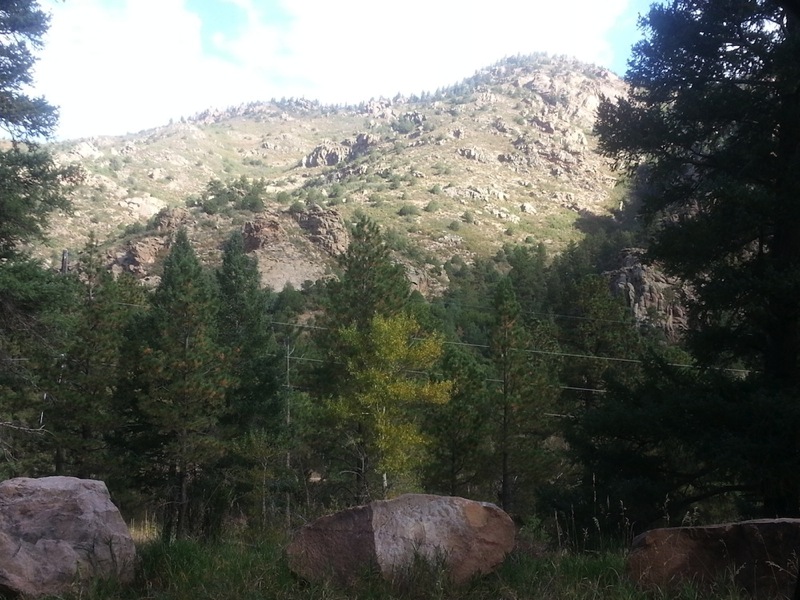 The other one looked a bit steeper, though I couldn’t see much of it through the forest that blanketed its base (inside of which I was currently camping). 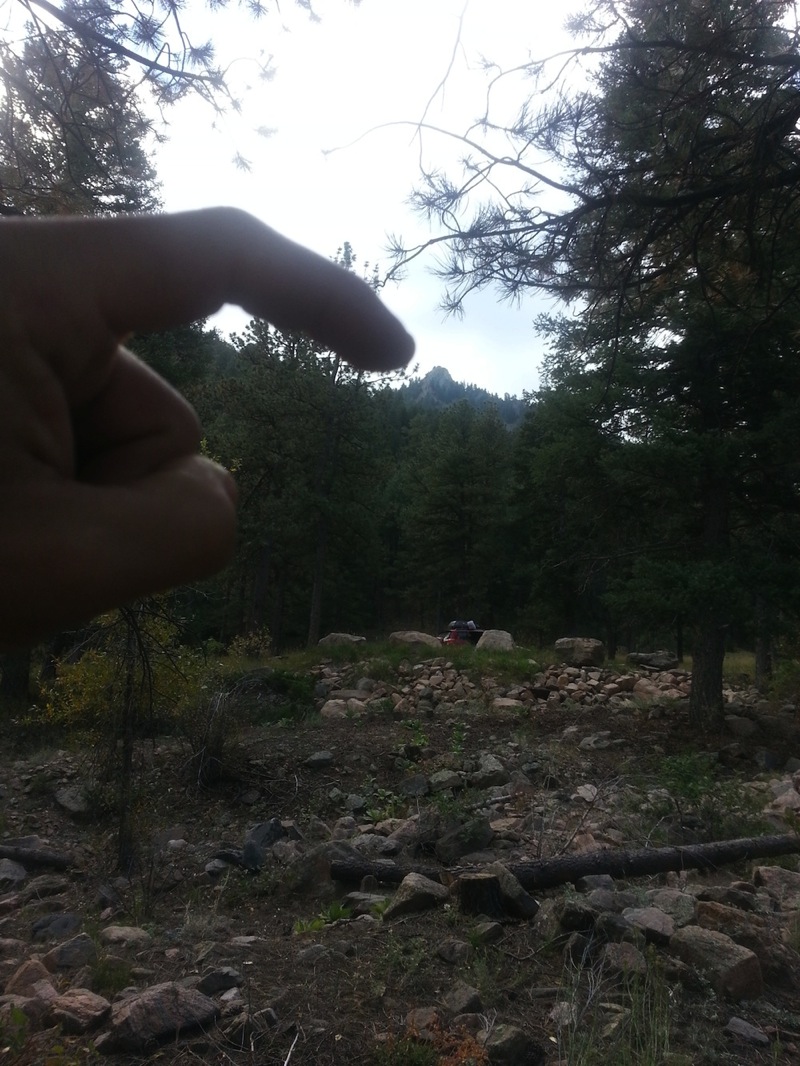 I could simply see the peak – the end goal. Anything could be hidden between me and that goal: dense vegetation, crevasses…large, furry creatures with big teeth. My mind wandered back to my experience the night before, sitting in the darkness.

You can probably guess which mountain I decided to go with.

An hour later, I had my bag packed with a few necessities, just in case things went sour (cans of tuna, granola, water, knife, paracord, emergency whistle, etc.). Then I dawned my boots and headed through the trees, up the base of the unknown mountain.

As I began my hike, I told myself that I didn’t need to do this.

It might sound odd, but I wanted to remember that there wasn’t anything driving me to get to the top of that peak, save for the simple desire to give it a shot. If I reached a point where it didn’t feel right to keep going on, or if I suddenly no longer had the urge to do so, then there was no reason to push myself overboard, simply to satisfy a whim. I wasn’t attempting to finish a crossword puzzle here – I was trying to climb a mountain, without any mountain climbing gear. Or experience.

I promised myself that I would allow myself to turn back, if I suddenly felt the desire to do so – that I wouldn’t stay fixated on some insane mission to get to the top of that mountain, or die trying. You see, over time I’ve found that there’s a big difference between refusing to let go of a goal because it’s what you truly desire to do, and refusing to let go because you’re afraid of letting yourself (or others) down.

Alternatively, there’s a difference between allowing yourself to let go of a dream/goal because your heart is telling you that your desires have changed, and letting go of a dream because you’re scared of failure or intimidated by the potential obstacles.

The key is to have a constant willingness to follow your gut feeling in each and every moment. Telling myself that I had no obligations was, at that time, how I managed to do so.

And I’m convinced that this is why I had so much fun on the rest of that climb.

Well, for the majority of it at least.