Playing in the Hoosier Mud

The day began calm enough. I stopped at the Warm Candle Co. outlet store, which sits just past the Ohio–Indiana border along I-70. You can’t miss it – it has a thirty foot candle outside of it. 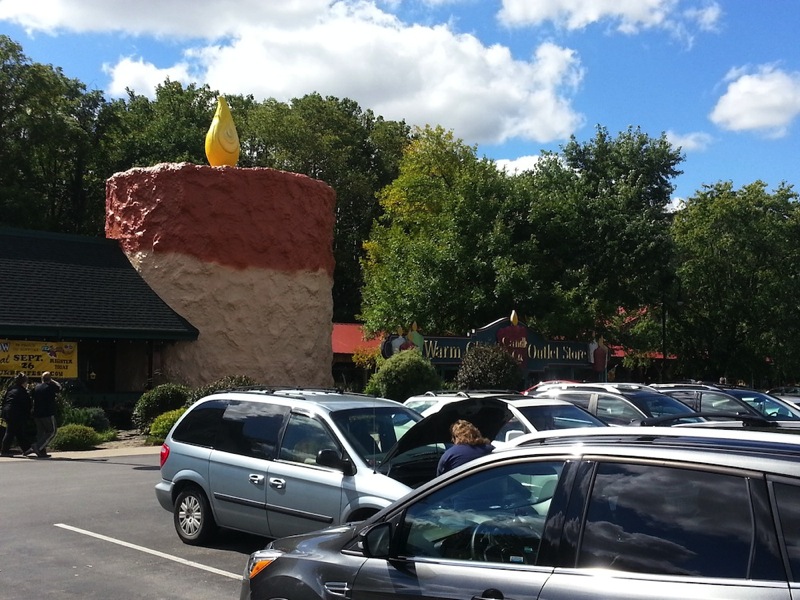 They have AWESOME prices on everything that they sell, which is all things country crafts. Pretty much the perfect place to bring Mom or a girlfriend…or me. I’m currently writing by the light of two candles that I bought there.

Nearing Indianapolis, I decided to skip the city and headed south to Hoosier National Forest. Winding along some gorgeous country roads, I eventually found myself in the tiny town of Story, Indiana. Another great place to bring a partner – lots of quaint B&B’s, a tavern, some small shops. I asked someone which way to the backwoods of Hoosier Forest, and he pointed me along down the road.

I hit a few dead ends as I drove along the dirt, back-country roads. One in particular turned out to be interesting. It was an old, creepy graveyard. But it wasn’t necessarily creepy because of the graves – rather, it was the gnarly, dilapidated outhouse that was unnerving. 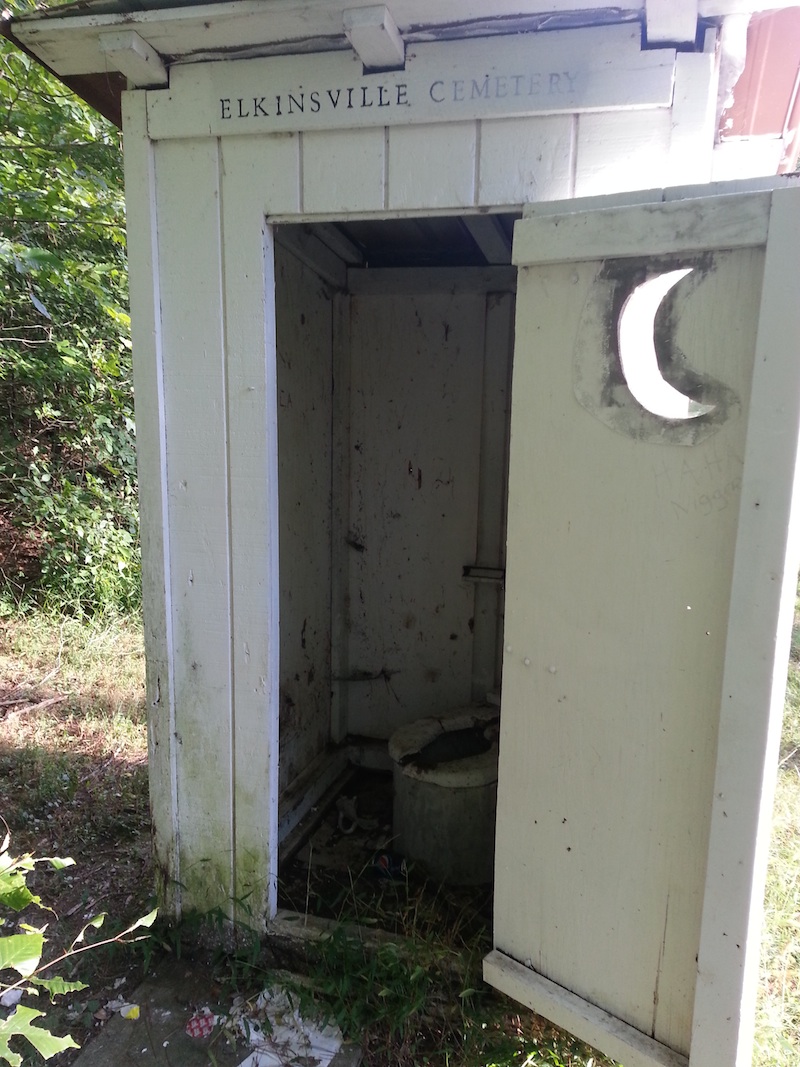 It was getting late in the day, and for me the race was on to find a safe place to camp in the RV4 for the night. The graveyard was a possibility, though I kept going to see what else I might find.

Finally, I came to what seemed like the spot. To the left of an abandoned bridge that crossed a creek (a very stagnant, muddy creek) was a sparsely vegetated patch of woods. There were obvious signs that others had been four-wheeling through it recently, and there was plenty of space to snake my way through the trees in order to avoid the giant puddles that had formed along the muddy path. I went for it. 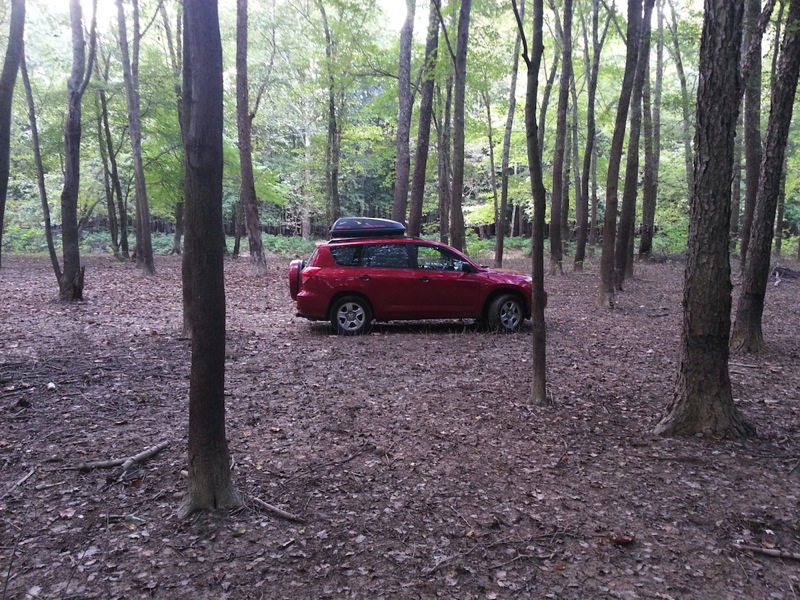 All went flawlessly. I found a good, level spot that had plenty of nearby firewood and little vegetation. But then I found it – after a little bit of exploring on foot, I found the perfect spot, which had even more firewood and was further away from the stagnant creek. It was only about 50 feet away from my current location, so I turned the RV4 around and headed for my newfound nirvana.

About 40 feet later, I was cockeyed in a small pond. 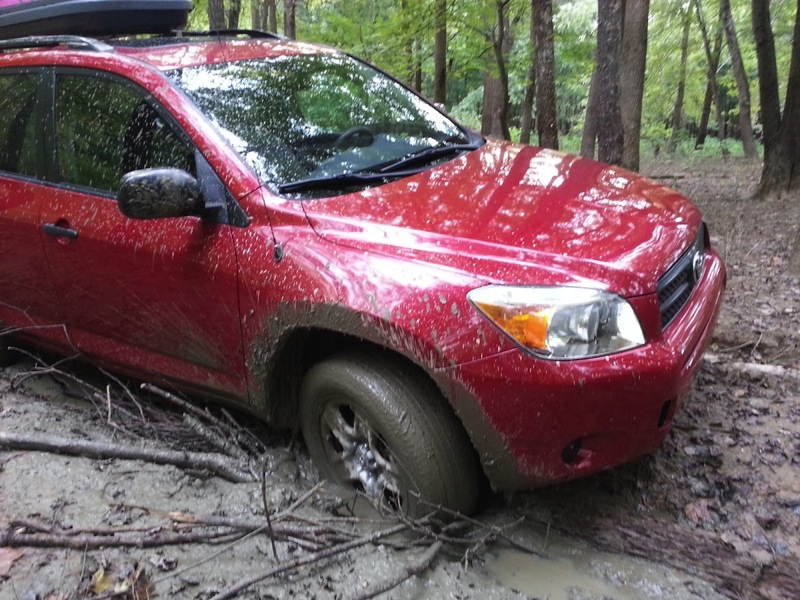 Ok, pond might be pushing it, but I did manage to slide right into a massive mud puddle. I gave it a good shot at getting out on my own. I tried ramming half of a bush underneath the tires, as if that might help. The sun was setting, and I had a decision to make. Stay here and keep pretending that I could do this on my own, or go get help. I went to get help, making sure to bring my flashlight just in case.

The first “house” that I came to after hiking about a quarter-mile wasn’t really much of a house at all. It looked like a tiny tent city, with several lean-to style tents packed together into one jumbled mess of American flags and camo. There was a table set outside – it looked like they were ready to eat dinner. I approached cautiously, calling out with each step and asking if anybody was home. Somebody had to be home, the table was set for six people!

Have you ever gotten the overwhelming feeling that you’re not supposed to be somewhere? Well I got it then, just as the banjo from Deliverance started playing in my head. I turned around and slowly crept away with my hands to my sides, even offering up an audible apology, just in case there was a rifle pointed at the back of my head from inside one of those tents. I still don’t understand why I suddenly felt that way, though it might be better if I kept it that way.

The next place that I came to was actually a house, with a satellite dish and everything. I could see the TV on inside, so I went up and knocked. An older man opened the door and suspiciously eyed me. I awkwardly explained my situation, even showing him a picture of the sinking RAV4. He tersely explained that the last time he helped a couple of city boys in the same predicament, they had flipped him off as they sped past with his good wench in the back of their truck. But eventually, he did offer to bring his tractor over to the spot. Actually, he didn’t say “tractor.” He used a word for it that I can’t remember and had never heard before. At the time, I thought that he was trying to swear at me, so we shared about ten seconds of silence, just staring at one another.

Eventually, however, we did arrange to meet back at the old bridge. I told him that I’d give him a little bit of money for his time, and raced ahead towards the car. 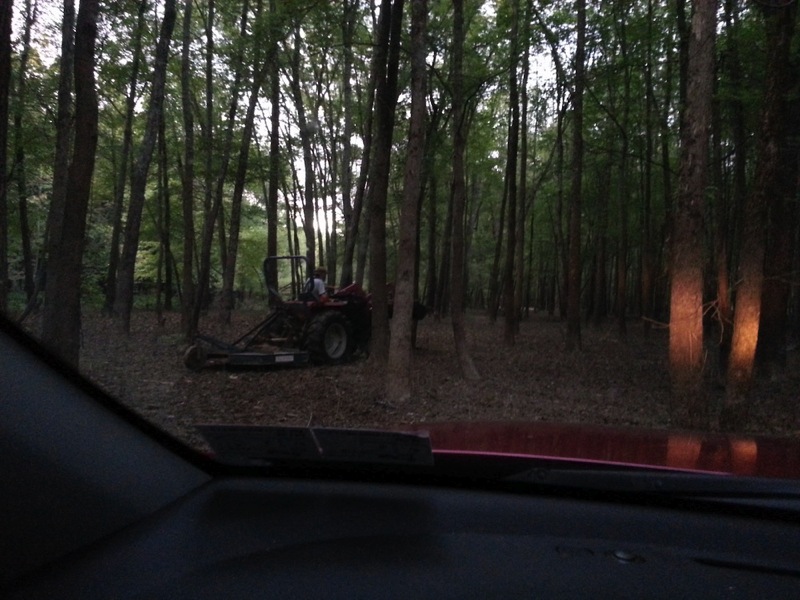 In about twenty minutes, he had hauled me out of the puddle and I was parked next to him back at the old bridge. I offered him $50, though he refused. I got out, shook his hand, and told him that my mother would thank him too if she knew about this. He laughed at this – the first time that I’d seen him crack a smile. Throughout the encounter, I’d told him my name three times, though not once did he respond with his. He obviously had his guard up, so I didn’t ask again. I got into my car, waved, and then drove off. I eventually found a small clearing along the side of a country road to camp at for the night – that graveyard was just too creepy.

I like to take lessons from everything that happens in my life, but this event took a little bit of thought. There were two possible messages to be taken from this. The first was to “stay put once you’ve found good enough,” though for some reason this didn’t sit well with me. One odd thing that I had noticed after all of this occurred is that not once did I get angry, panic, or become fearful. I simply accepted it as fact that I was stuck in a ditch, and then moved on towards a solution (I would note that this situation probably could have taken much longer to resolve itself). Historically, this has not been the way that I usually operate, and I was proud that I had done so this time. I guess that the lesson learned from all of this is best described as such:

Take risks. Live fully. Tough spots will come, but they sort themselves out faster if you go at it with a smile.

At least I got to change that man’s perception of city boys.