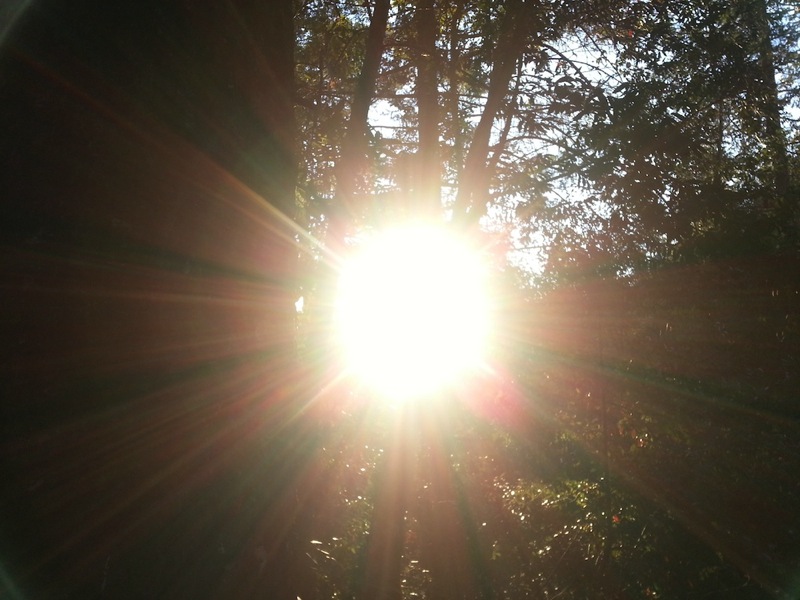 En route to San Isabel National Forest, I eventually again found myself on some dirt roads.

And it felt damn good – it just felt right.

Of course, it turned into one of the bumpiest rides of my life. I’m not sure if they were designed that way, or if it was a natural result of water erosion, but the roads leading up into the national forest had qualities not unlike a beefed-up highway rumble strip.

No matter. After my revelation back in Colorado Springs earlier that day, I would take dirt over asphalt, regardless of the quality. And besides, the RV4 could take it. She might not be a Land Rover, but she could hold her own. 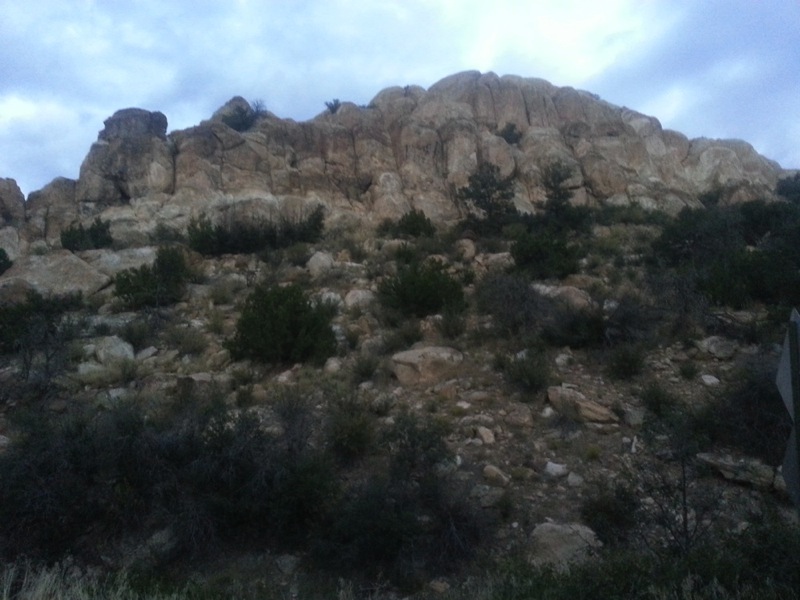 There were incredible sights all along the road – landforms and creatures that I had never witnessed before. It seemed as though I was stopping every five minutes to take in something new and beautiful. And then I met this little guy, as he was trying to cross the road: 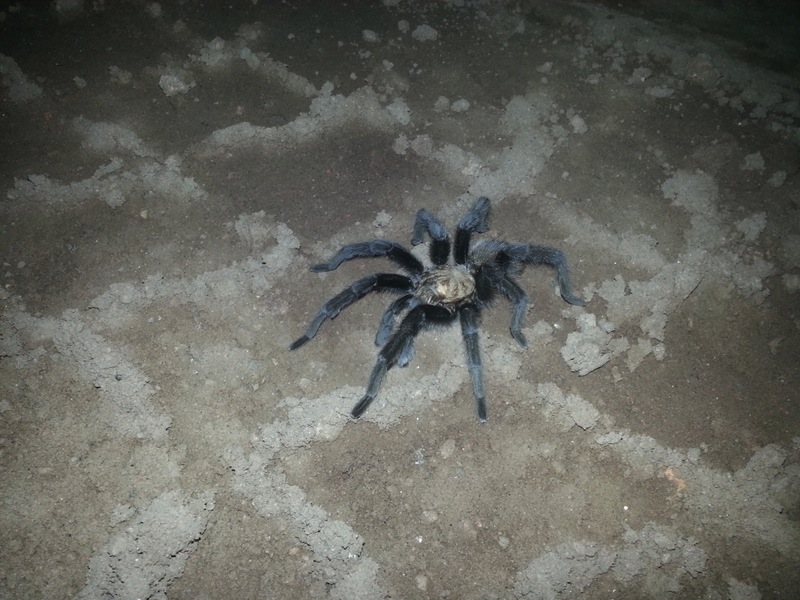 That’s when I knew for a fact that I wasn’t in Kansas anymore. Or Missouri, Indiana, Ohio, or Pennsylvania. I was in an entirely different biosphere than I was accustomed to.

And I was loving it. 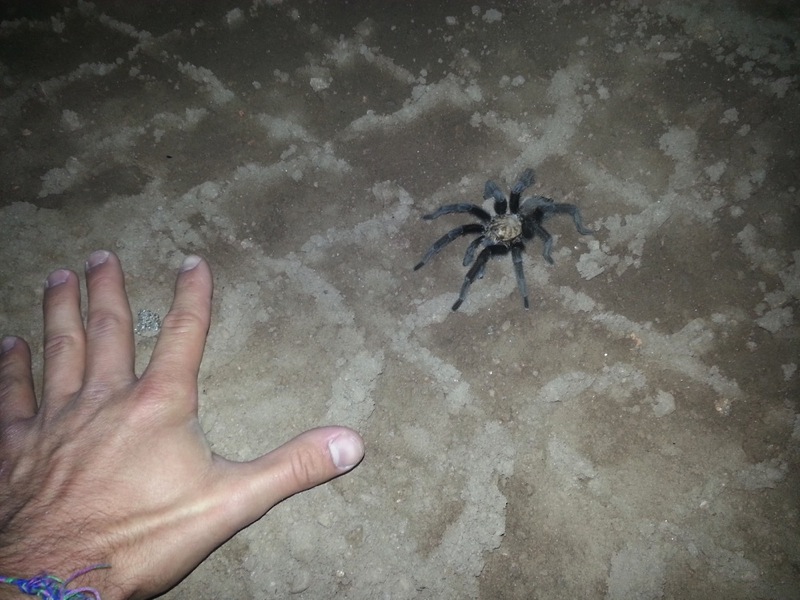 After playing with the tarantula for far longer than I should have, I continued on up into the mountains. It had gotten dark – and the roads were getting treacherous. But even at night, the view was phenomenal.

After a long series of twists and bends along the perpetually bumpy road, I reached my destination for the night: Oak Creek Campground.

It was a ghost town.

There wasn’t a soul there. Even when tucked safely in the car, it felt uncomfortably eerie.

I pulled up next to a bulletin board. On it was pinned a series of papers that relayed the rules of the campground. But that’s not what caught my attention…

It was the pages that relayed how to handle the bears that sparked my interest.

And it wasn’t some sort of offhand in-the-rare-case-that-you-spot-one kind of notice, like those you might find back in Western Pennsylvania. No, it was more of a this-is-their-turf-and-you’re-trespassing-don’t-be-a-dumbass kind of message.

A Different Kind of Darkness

The campground was made up of a half-mile loop of dirt path that wound its way through the evergreen trees, with a dozen or so cleared sites scattered throughout. No lights or electricity this far up into the mountains.

Every campground that I had been to up until that point in my Journey of Fear had had some sort of lighting nearby – but not this place. Even the moon was hidden out of sight.

I perused through the sites – since I had the entire place to myself – though I did so from the safety of the RV4. It felt strange to me, only being able to see whatever the headlights fell upon, and almost nothing else. I pulled out my flashlight and began shining it out the window. I spotted a plot inside an open patch of trees that looked like it might be nice. Leaving the car running, I got out and checked it out.

That’s when I first felt it – the overwhelming feeling that some nefarious beast was lurking just behind me, crouching in the shadows.

I spun around, pointing my flashlight every which way. Nothing. Still scanning the darkness out of the corner of my eye, I went back to inspecting the campsite. This one wasn’t it.

I scurried back into the RV4 like a small rodent and slammed the door. Clicking the high-beams on, I continued driving, until I at last came across a spot that felt right. I stopped and got a closer look. Fire pit, fairly level parking spot, large boulders to hide behind if/when necessary, and (save for a few scattered trees) a landscape that had fairly open sight lines. This one was it – it would be my fortress.

I didn’t hesitate for a second. First thing, I built a fire.

After 20 minutes or so, I had a small, crackling flame going strong, and my camp was all set up. But even with the dim light of the flickering fire to “keep me safe,” I still didn’t feel like I was. With every creak, pop and crack that echoed out from within the dark forest came a head-jerking reaction, followed by a thorough scan of my flashlight.

Truth is, regardless of how far it cast, the firelight would always have a limit. There was still a line, beyond which the light could not shine any further. And past that line, anything at all could be hiding in the shadow – waiting to pounce.

I looked around into the night. The wind was whistling fiercely through the treetops, carrying a chill with it as it went. Small burrs and needles rained down from the pine trees. As I turned my eyes back down to the flames, I breathed in deep. Then I closed them.

And finally, in that moment, I remembered.

I remembered why I was here, and what had catalyzed my decision to venture across the country. I remembered that night in The Graveyard, and the realization that I would one day die, regardless of whatever precautionary measures I might take in the meantime.

And I remembered my desire to actually live while I was still alive.

A sudden peace fell over me. As if I had lifted a pair of sunglasses from my eyes, that place no longer seemed so dark. The fire was radiating a passionate glow over my whole world. I felt the breeze on my skin, and inhaled the intoxicating mountain air.

I finally saw the impossible beauty of this place, and of this moment. Everything else just melted away.

I made a cup of tea, and after an hour or so I made my way into the RV4. With the sunroof open, I fell asleep to the sound of the wind, surging through the trees.