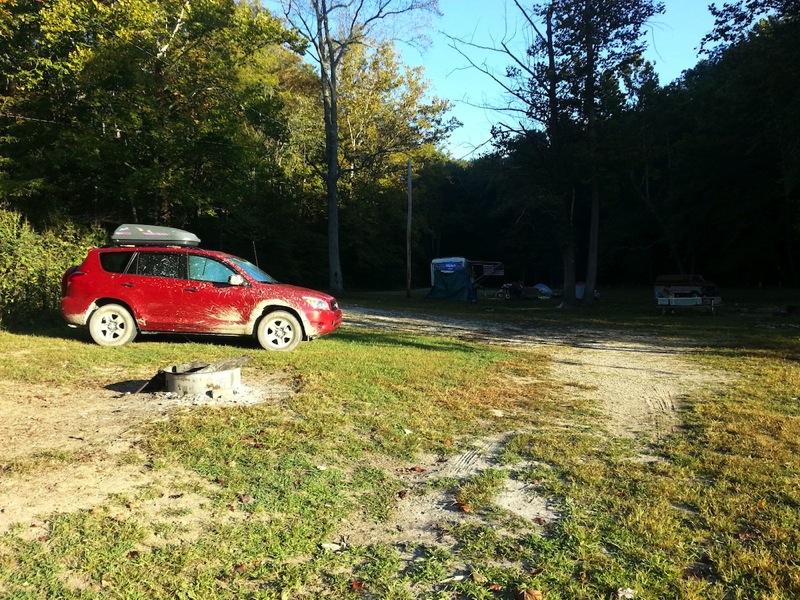 Now that you know about the downward Cycle of Fear that I had to crawl out of whenever I moved back to Pittsburgh, as well as the Way I Believe Our Minds Work, I can explain to you the next stage of my trip.

After spending a few hours hopelessly lost as I drove the state roads surrounding Patoka Lake, I eventually found a state trooper, who gave me directions to a free campsite.

The site was absolutely beautiful, and I found a spot that was directly on the lake. Prime real-estate. There was only one other vehicle camped nearby – an RV with an American flag hung outside. While I had been hoping for some seclusion in order to write, I would have to put up with neighbors. I was just hoping that they weren’t the partying, redneck types.

They weren’t. They ended up being a sweet pair of travelers, husband and wife, who were trekking across country, just like myself. When they told me that he was pushing 70-years-old, I was dumbfounded – he barely looked 50. Now, looking back on things, I’m even more shocked, considering what our first conversation was about.

I remember how the convo started. A girl had been at the campsite just a few minutes prior, who apparently had tons of anti-GMO (Genetically Modified Organisms) bumper stickers on her car. You know the type. The conversation between me and the couple started out docile enough, after I had gone over to speak with them briefly (they were extremely outgoing, happy people – I just couldn’t help talking to them). But somehow, within no time the conversation had elevated, and we were discussing the same, terrifying conspiracy theories that had caught me in that whirlwind of fear back in Columbus.

I was shocked. From my experience, the older generations often didn’t believe in these types of things. But I guess that fate would have it that the first major stop along my Journey of Fear would prove to be a reminder of where I once had been.

I Took the Bait

I could have changed the topic. I could have walked away. I could have even told them how I believed that focusing on the fear would only lead to more fear, which was further from a resolution. But instead, I went along with the discussion, egging it along and adding in my own unique worries about the future of humanity. It felt good to have someone else who had the same “crazy” beliefs as I had once held on to, so I went all in.

But something in the back of my mind was screaming. It was reminding me that I had been here before, and how difficult it had been to work my way out of that incessant cycle of fear-mongering. I didn’t listen.

Maybe I’m going nuts myself, but throughout this trip, I’ve experienced dozens of happenings that I can only describe as “lessons from above.” And this was one of them. It made me start to question whether those people who believe that the universe aligns itself to give you what you think about were really all that far off from the truth.

A van pulled up to the campsite – one of those older passenger vans. The procession that proceeded reminded me of a Barnum & Bailey event. Five adults, a teenager, a baby, and two dogs all came pouring out into the campground. And what else would their first words be, if they weren’t:

“We just came from southern California, where FEMA’s been rounding up the homeless, packin’ them into concentration camps, and killin’ em by the hundreds.”

I Can’t Explain It

I’ve driven thousands of miles since that point, and have met hundreds of people. Never once have I met another group that had fallen victim to all of the same fears that I had once held – let alone two entirely separate groups who randomly wound up at the same campground as me.

For myself, this chance meeting proved to be some sort of universal proof in what I was beginning to believe. I let the fears that had once consumed me again overtake my mind, and as a result I was led to meet even more people who could contribute to my list of fears. Don’t ask me to explain it, because I can’t. You can just call it an odd coincidence if you like. For me, it was a sign from something high above that I was on the right track – at least as far as my beliefs went.

For the next three days, the campfire stories only proved to grow more and more grim. Tales of impending world devastation and rapid depopulation via nefarious government plots filled the smoky air. And in my mind, I knew that I only had myself to blame.

Thankfully, that’s not all that I was to learn from that incredible group of travelers.

2 comments to “Is it Coincidence”