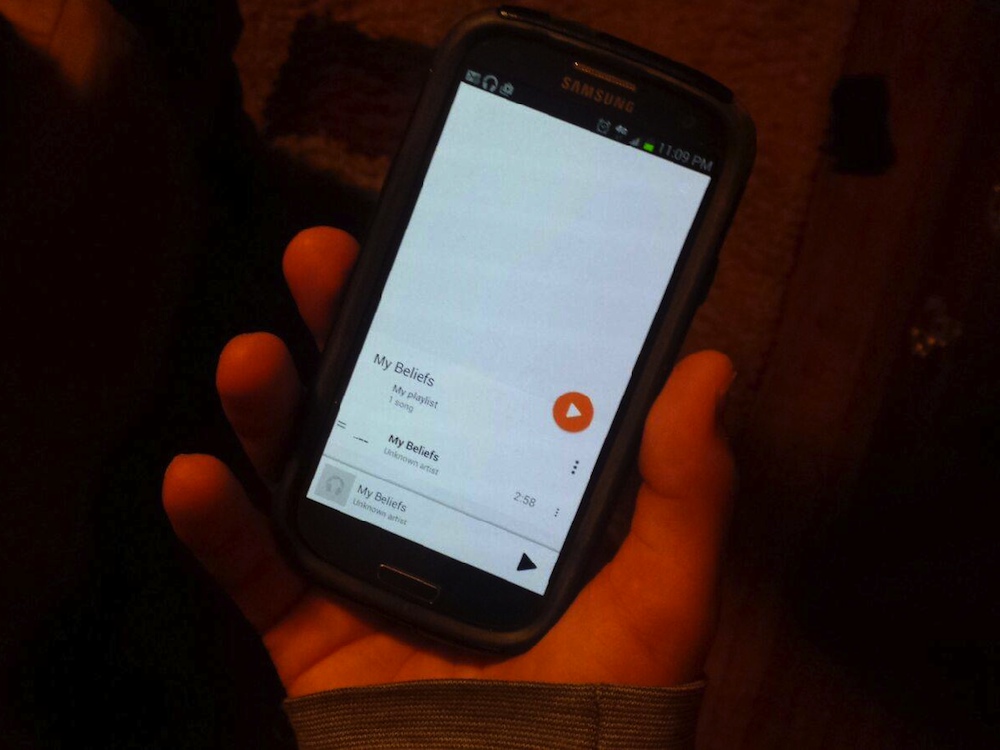 After I finished meditating and got reacquainted with the world, I picked up my cushion and walked back to the RV4.

Crawling inside, I started up the engine, turned the heater on, and then pulled open the rear storage compartment (the basement), where my AC inverter was mounted next to where I kept my 120-volt electric pan. I turned the inverter on, plugged the pan into it, and then waited for it to boil a few cups of water. I’d grown accustomed to having a nice cup of tea and some oatmeal at the start of my days.

As I waited inside my cozy living space, I decided to listen to the audio recording that, over the past several months, had brought me a great deal of comfort whenever I needed it.

Before my trip had even been conceptualized, I’d been exposed to an activity that many success coaches call “daily affirmations,” – and what many of the realists that I know might call “bull shit.” But I personally believe that there’s more to the subconscious mind than we will ever fully understand. Therefore, I decided to give this affirmation thing a whole-hearted attempt.

Positive affirmation is essentially the act of repeating an idea to yourself – either by writing it, thinking it, or speaking it aloud – in the attempt to make it a firm belief.

A belief, after all, is nothing more than an idea that you KNOW to be true.

What’s the value in being able to shape your own beliefs? Obviously, if you believe that you’re beautiful and magnificent, you’re going to have a much better life than if you believe you are ugly and worthless. I would argue that one’s beliefs hold powers that even extend into the world of miracles.

You know those stories where people make unimaginable recoveries from illnesses and injuries? Like those who walk after shattering their spine, or make a return from stage-IV cancer. Well, they usually have one thing in common:

The unwavering belief that it WILL happen.

A year or so ago, after catching on to this new, untested ability, I decided to begin to dabble with it. Every night and every morning, I would spout off a list of affirmations; ideas that I wished to engrain into my own mind. I would say them over and over. And you know what?

I saw a glimmer of change.

I noticed shifts in the way I thought and acted, which often related directly to the words I had said the night before. It wasn’t any sort of miraculous change, and the effects would usually only last for a few days, before I’d return to my normal way of looking at things. But it was a start.

Then, six months ago, I decided to make the mother of all affirmations – a recording of my own voice, which I could play at any moment throughout the day to remind myself of what I wished to believe. I created it as a pick-me-up for whenever I was feeling down, and a way to draw myself back into a positive mindset. It worked. For the next several weeks, I listened to the track on repeat, and it always seemed to pick me right up. I thought I’d struck gold.

In truth, I did. But, as was the case before, I noticed the effects beginning to wear off over time. It was as though there was only a certain number of times that I could listen to the same affirmation or repeat the same phrase before it lost it’s potency in my mind. It wouldn’t be until about halfway through my Journey of Fear that I would finally start to figure out what was going on here.

So I guess that it was odd that I suddenly had the urge to listen to it again as I sat there, waiting for breakfast to boil. But my mind had been in turmoil over the past 24 hours, so I figured that anything could help. And it did.

With the same potency as when I had first created it, “My Beliefs” (the title I gave to the track) brought me momentarily back into a good place.

I’ve decided to share it with you, for a number of reasons. But the biggest one of all is this:

So that you might understand better what my goals and desires were before my Journey, and how much I’ve grown along the way.

When I originally wrote “My Beliefs,” I was much more concerned with feeling safe and comfortable. I wanted to believe that financial wealth was inevitably coming my way, and that I didn’t need to worry any more.

I wanted to believe without any doubt that the business I was attempting to start, The Affectionate Jackass (long story, read my About page for more info on the process leading up to that), WOULD succeed. I wanted to have faith that my life would one day resemble the image that I’d been clinging to for so long – wealth, power, protection…I really have changed, haven’t I.

The true beauty of this track, however, lies in the second half (after the bit about The Affectionate Jackass). I am thrilled to say that most of what I had been affirming – all that wasn’t rooted in my fears of vulnerability – has, by now, become solidified within my belief system. Hey, maybe this affirmation stuff works after all?

Without further adieu, I present to you that which I wanted to believe before embarking on my Journey. Perhaps later on I’ll have another post that explains what I truly think of this track today. Who knows, maybe I’ll even make a new one, and post that as well?

P.S. Yeah, my goals for the company that I named The Affectionate Jackass do sound a bit lofty – particularly when considering that I named it THE AFFECTIONATE JACKASS. But hey, my heart was in the right spot. Don’t worry, I wouldn’t be offended if you laughed at that part…I probably would too.